A lethal new drug called “gray death” is a toxic cocktail contributing to the opioid epidemic sweeping our nation. While it may sound like something created in a comic book villain’s laboratory, it is unfortunately very real and very scary. More powerful than heroin on its own, Gray Death is a compound of synthetic opioids, heroin, fentanyl, and carfentanil, with other unidentified drugs mixed in.  Carfentanil is used as an elephant tranquilizer, and is 10,000 times stronger than morphine. Each batch varies in amounts of different combinations of a wide array of drugs. Users can smoke, snort, swallow, inject, or let it absorb into their bloodstream through their skin. It is so powerful that even touching it with gloves on or making airborne contact can be deadly.

The infographic below shows the amount of each drug a user would have to ingest before overdosing. When mixed, the results are similar to that of a toxic heroin overdose. 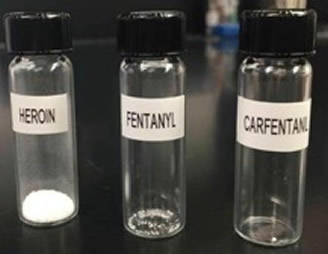 Interestingly enough, chemists do not know what causes it to be gray, as none of the chemical compounds allow for that. In fact, little is known about this drug because of how new it is, and how each batch varies. What we know for sure is that it is dangerous, and it is spreading rapidly through the south. Four overdoses have been directly linked to gray death, and two deaths were reported earlier this week.

With most opioid overdoses, Narcan can be used as the antidote. Unfortunately, doctors have found that it has little to not effect on gray death users, due to the extreme potency and concentration in the drug. Doctors have been working alongside chemists to find out more about the chemical properties of these drugs in order to create a treatment. In the mean time, law enforcement is seizing all batches they are able to find to keep it off of the streets, and to keep it from spreading to the rest of the country.

Siemaszko, C. (2017, May 05). What Is Gray Death? The Killer Drug Cocktail Is Latest Battle in War Against Opioids. Retrieved May 22, 2017, from http://www.nbcnews.com/storyline/americas-heroin-epidemic/what-gray-death-killer-drug-cocktail-latest-battle-war-against-n755546